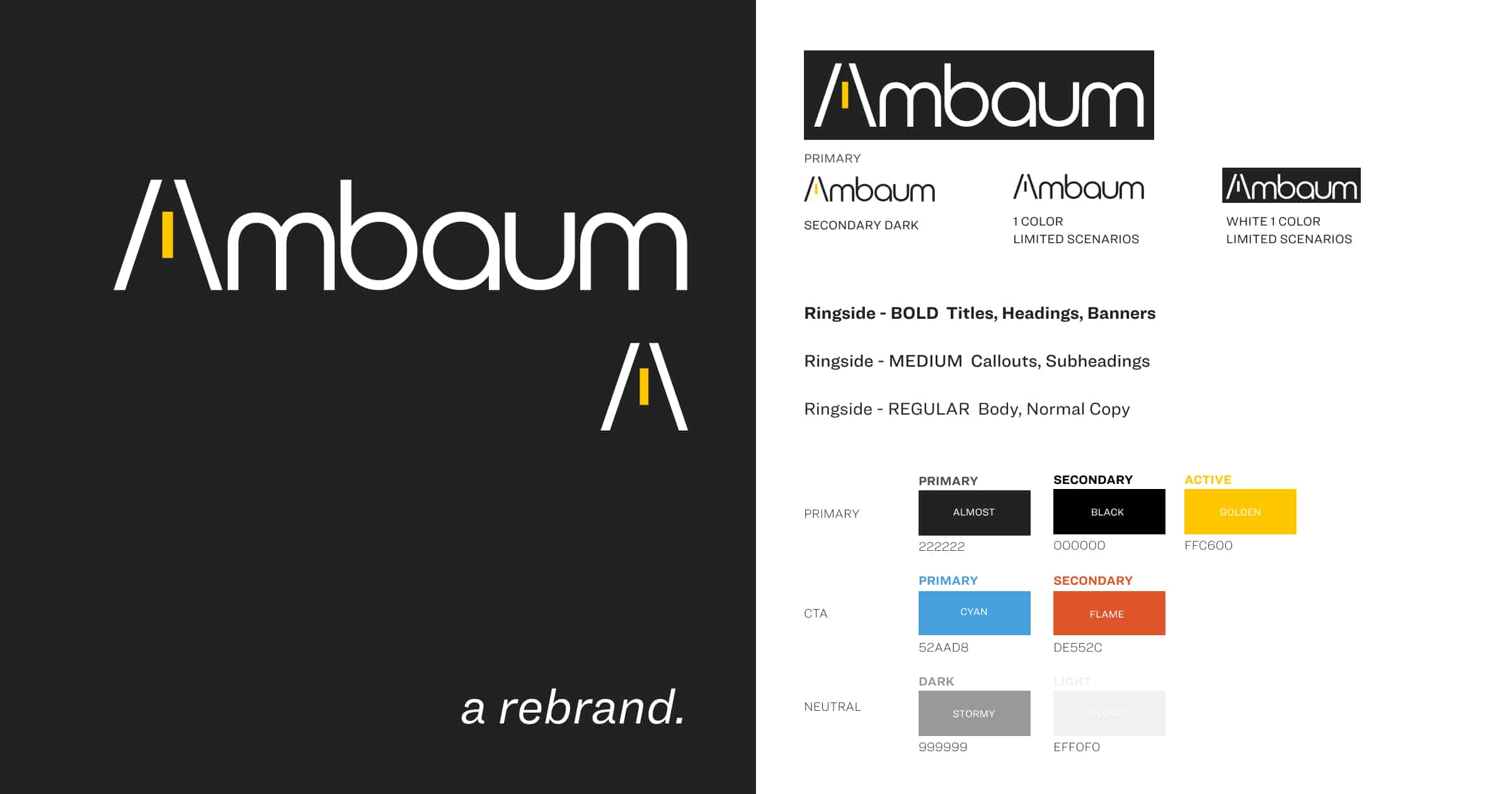 Behind the Scenes With the Ambaum Rebrand

BTown Web, a Seattle based Shopify Plus agency, announced they have fully rebranded to Ambaum Labs, LLC, or Ambaum for short. As a Shopify Plus Partner Agency, Ambaum brings both merchant and agency experience – helping clients navigate and grow their business through the online shopping path. With a seasoned team of Shopify Plus developers, the agency supports client’s technical needs with site development, migrations, integrations and custom development.

Over a cup of coffee from Seattle’s Seven Coffee Roasters (Ambaum client), we went behind the scenes to chat about the exciting rebrand with Founder & CEO Chad Fisher and COO David Stober.

“I grew up in Burien, Washington and the name BTown Web was a special name for me when we created the company 7 years ago. The Company began its life in a one-room office next to a small ‘locals’ restaurant in downtown Burien called Angelo’s. Like the restaurant and City of Burien, BTown Web was started with grit and boot-strapping with my first two development hires, Andrew Crawley and Matt Peters (both still with the Company). Early on, our small little Company cut our teeth on custom WordPress, WooCommerce and really any other little development projects we could take on. We not only survived in the early days, but managed to add team members and more clients. Fast forward to 2014 when everything changed with the broad acceleration of eCommerce and the emergence of a new SaaS technology platform company Shopify,” said Chad Fisher.

What made you decide to rebrand?

“BTown Web was a perfect name in the early stages of our company, but as we grew it became clear we needed something with a broader appeal. One of our first Shopify Plus clients came by way of an elementary school friend of mine who I had recently reconnected with, David Stober.  David at the time was running a print manufacturing business that happened to be scaling to include online small-run custom print and packaging services as a Shopify Plus merchant (he later found out he was one of the first 50 merchants on Shopify Plus). Through this business relationship and friendship, one thing led to another and then in 2019 he and I began to map out a plan for David to join BTown. Then in 2019 David formally came on board as COO to help scale our growing Shopify Plus Partner Agency and one of the first things he began to drive was the need to rebrand,” explained Chad Fisher.

The meaning of Ambaum

“Ambaum is the road that our agency is located on in the heart of Burien, WA. Ambaum started off as a muddy wagon trail built in 1912 by locals with wheelbarrows, picks, shovels and hard work. Jacob Ambaum was a German immigrant from Ohio that had the inspiration for the creation of the road after which he is now named. Ambaum for us is a symbol of the hard work it takes to build something out of nothing and the power of connecting people and places,” said Chad Fisher.

Why should merchants choose Ambaum as their Shopify Plus growth agency?

“Ambaum is a team of Shopify Plus Experts, development professionals and business builders that partners with brands looking to grow their digital business and online revenue. Historically, selling online was at best a single channel and at worst, simply a box checking exercise for mos CMOs. In today’s commerce climate though, a digital strategy is no longer simply a nice to have – now digital is an absolute necessity which has been accelerated even more by Covid-19,” said David Stober.

“As fellow merchants, we have intimate knowledge of the daily challenges our clients face. The reality is there isn’t a one-size-fits-all method when it comes to scaling an eCommerce business. It takes an openness to change, correct context and a holistic approach. Success takes not only building a great digital foundation and the marketing systems to acquire customers, but also a true owner’s empathy- taking into account the broader business objectives and impacts to operations and finance.  At Ambaum,  we believe we set ourselves apart as an Agency by viewing our merchants through the lens of the merchant and really putting ourselves in the shoes of the business owner,acting as if it were our own Company,” continued David Stober.

A look ahead and the future of Ambaum

Chad and David shared that Ambaum aims to be the premier Shopify Plus Growth Agency for high-growth digital merchants and passionate brands. “We will accomplish this by heavily investing in our team of eCommerce and development professionals to scale a world-class organization that delivers best-in-class design, development, growth marketing and custom apps to our clients and the broader Shopify ecosystem,” said Chad Fisher.